The Gamo CFR Whisper was one of the main innovations of 2010. This clear evolution of the CFX GAMO stands out for its simple finishes and adjusted selling price.

Some years ago, GAMO decided to bet on a new line of airguns with fixed barrel. One of the main reasons for this bet was that the weapons equipped with this system are far more accurate than traditional tilting barrel, since intervening fewer moving parts are often better groupings. 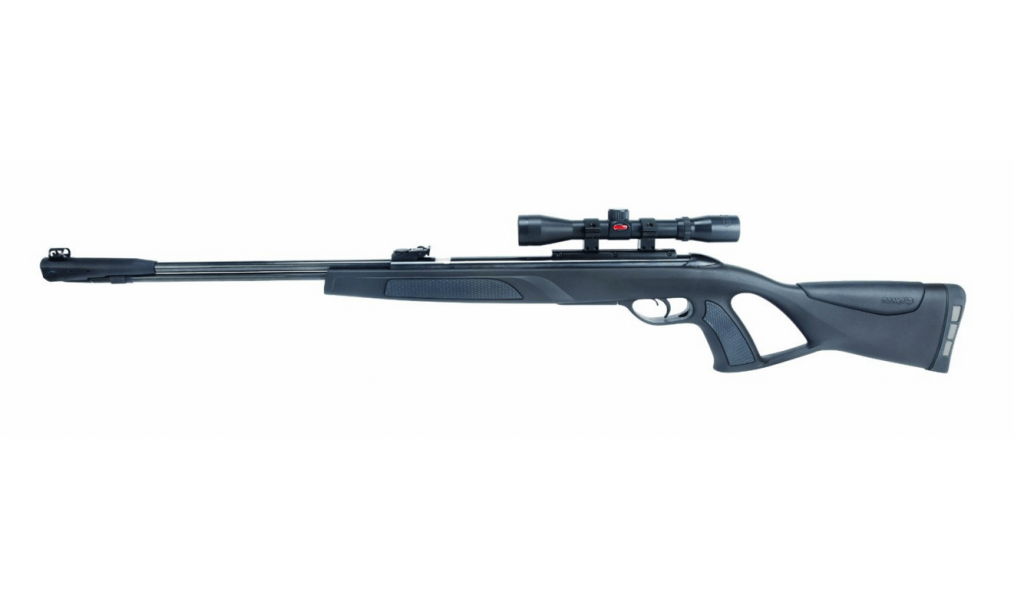 Until 2010, the product perhaps best identified with this range of fixed barrel carbines was successful GAMO CFX. For a long time, the standard version CFX and “luxury”, the CFX Royal, reigned between the fixed barrel rifles designed by the Spanish company. However, this hegemony has been seriously threatened with the launch of a new model, similar to the CFX but introduces some significant changes. This is the Gamo CFR Whisper. In essence, the Whisper CFR is a simple air rifle with fixed barrel and front loading, available in two sizes: 4.5mm and 5.5mm. As mentioned, this rifle was an evolution regarding the popular family of carbines Gamo CFX. In this sense, the CFR Whisper has adopted the same platform as the CFX, although that design has been added with important improvements, such as adjustable cheek and a sound moderator. Let’s get to know the best parts of this air rifle.

Aesthetically, the CFR Whisper can remind the tactical models of Gamo, such as its new line Socom, or one of its great classics, born over 20 years ago under the identifying name Command (although the latter could be considered rather a pistol carbine). Aas we have seen, the Gamo CFR Whisper stands out for its ergonomic design, facilitating handling and rapid shouldering. In this sense, one of the most important aspects is its stock with adjustable cheek piece, which allows the shooter to adapt the rifle to the right measure. Precisely at the end of its stock, by the way, completely ambidextrous, we find ventilated facilitates the absorption of recoil generated after each shot. The model we have had a chance to try is the caliber 4.5mm, which offers a speed mouth considerable: 305 m / s. Nevertheless, thanks to its built -in serial moderator sound, it is not too loud, something appreciated especially when long sessions of shooting are held.

As regards its sighting elements, the Whisper CFR has a micrometric rise classical steel and two green optical fibers that facilitate the approach to our goal. To further enhance the view of the target, just at the end of the barrel is also provided a small fiber optic point. If the shooter wants to shoot with open sights they can do that too. In case you prefer to use an optical sight of variables fixed increases or technicians GAMO have installed a small strip of aluminum on the barrel that allows the mounting of any viewer or element of additional aim. In addition to all these features, Gamo CFR Whisper has other elements that place as a chaperone to consider for those seeking an airgun initiation. In this regard, they highlighted the quality of the polymer which is made with synthetic stock, the chopped posting in its pistol and its forearm to improve the grip of the gun, or trigger two times.

The Gamo CFR Whisper has the same fix barrel design like their CFX model. For that very reason, I was expecting higher precision of accuracy from this air rifle and I have to admit that I wasn’t disappointed at all. You will achieve the velocity around 1100 fps while using the platinum ammo. That is an amazing number, so you know that this is not a toy that you can play with. With that amount of speed generated you can make sure that the bullet goes through to your desired target.

The air rifle is quite powerful and such air rifles make big noise which can be a problem itself. But with the Gamo CFR Whisper, you won’t need to worry about the noise issue as it got an integrated ND52 noise dampener system. Which makes sure that you can shoot as much as you want to create the minimum amount of distraction. Another solid reason to opt for this particular air gun as most air rifles are quite loud and that is a big disadvantage in cases like hunting. Because that will alert your targets. Also, if you wish you can use this to control the creepy pests in your background without making any fuss.

As for safety, it has two types of insurance: cargo insurance and a manual trigger. To complete its virtues, like the other models manufactured by Gamo, the CFR Whisper also has a very reasonable price too.

There aren’t that many problems that come with the Gamo CFR, to be frank with. The issues that I will mention here won’t be a problem for many but still I want to give some heads up. While using the Gamo CFR I found the trigger quite tricky. It is little jacked up. The air gun has an auto safety so it would take some time to be able to figure out when the rifle is on safe. Rather than these, there aren’t anything that would can be mentioned as a big problem at all.

Take a look at other Air Rifles By Gamo

In short, it is a precise, elegant, reliable and excellent air rifle for only $250, which aspires to inherit the hegemony of its successful predecessor carbine. If you compare the goods with the negatives of the Gamo CFR Whisper then you will clearly see that this air rifle is worth the value.