Today in Air Rifle Village the air rifle that I have is the Crossman Nitro Venom. An affordable rifle with some high-tech features that made it one of the most loved weapon. The Crosman Nitro Venom Break Barrel Air Rifle is .22 caliber break barrel air rifle. The American manufacturers have used the gas-piston technology instead of conventional spring like the Benjamin Nitro which is one of its direct competitions.
Now the important part is to find out whether this air rifle has enough to characteristics that users would love. If you’re also interested to find out the answer then be with us. Here we will discuss the Review of Crosman Nitro Venom Break Barrel Air Rifle to help you making the decision. 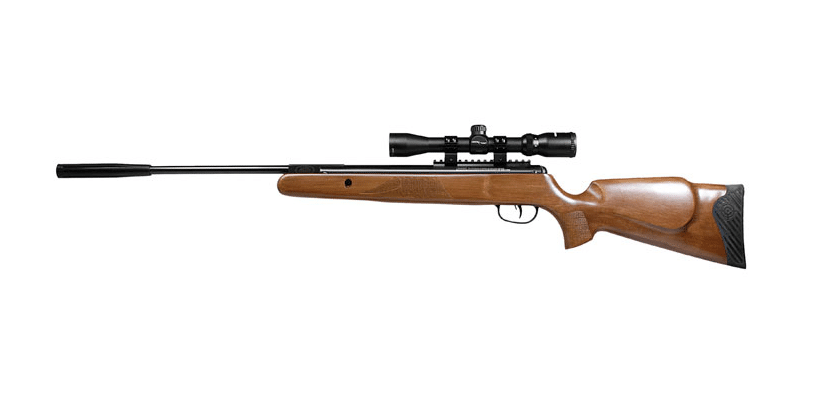 History of the Crossman Nitro Venom

As you already have the idea that the Crossman Nitro Venom is a .22 caliber air rifle and uses nitro piston technology for the firepower. In most of the air rifles springs are used but the nitro piston technology is becoming popular as more manufacturers are using it nowadays.
The nitro piston works the same as the traditional coiled spring for the propulsion system. The only difference is that instead of the spring there is a nitrogen-filled gas cylinder and a piston.
Beside that, the Nitro Venom is a break barrel rifle. So for loading the ammo you have to cock it. Another this about the gun is that it is a single shot weapon. So one shot at a time.

Here is the detailed spec of Crosman Nitro Venom Break Barrel Air Rifle. You should check these before buying the and also if you want to compare this air rifle with any other of the same or different brand within the similar price range. So it will help you check out the qualities it have and qualities it lacks from other ones.

Like I have said hundred of times before that the first and the most important thing about a gun is its power. This is very important of every user and it is certain that the Crossman Nitro Venom offers plenty of fire power. According to the manufacturer, the air rifle could reach 950 fps with the alloy pellets. And the number is around 800 fps with the lead pellet which isn’t that bad. Maybe the velocity isn’t that much if you compare with other competitors but don’t let that fool you. Because the air rifle produces enough power to penetrate animals like a squirrel or other pests in 40-50-yard range. Even you can make dents on steel targets with ease using it. Therefore, we can assume that it isn’t a plaything for kids rather a weapon with great capacity.

The Crosman Nitro Venom Break Barrel Air Rifle is a single shot air rifle. So, using such type of guns need exceptional composure, skill and the most important virtue of all is patience. Because you would have only one shot to make it count. For target practicing that won’t be an issue but in hunting situation all depends on the shot. If you miss then you might not get the second chance to take down your prey. So, accuracy is of great importance in this sort of conditions. And for in such crunch moments the Crossman Nitro Venom is without any doubt is the perfect rifle you would love to have.  The pinpoint precision of the rifle will assist with your shooting skill. With this rifle, you could hit your target consistently with ease. But don’t forget, first you need to know how to shoot properly.

More and more manufacturers are adopting the gas-piston technology in their air rifles. But Crossman could really be considered as the pioneer as they took it in a new level. This technology has many advantages and one of that you can notice in the Nitro Venom is the cocking system of the rifle. If you have every used a spring coiled rifle then you would notice that. Because of the nitro piston it is very easy to cock the gun which is sometimes a concern with the traditional spring coiled guns. There are other benefits of this tech. With most guns shooting comes with some pain because of the rebound. But that is hardly a case with the Nitro Venom thanks to the gas cylinder. Also, the shooting is quite smooth with it as it doesn’t create any big vibration while firing. A big problem with spring coiled rifles is that they aren’t suitable in all weathers. In cold seasons, the coil gets affected of the gun which is never good. But there is nothing to worry about with this gun as the nitrogen gas used isn’t affected by any weather at all. So whatever the temperature is, you will get the same power and consistency with it.

The design of the Crossman Nitro Venom gives it an old fashioned look which actually is nice. The brown hardwood of the rifle catches attention. The air rifle is ambidextrous in design so both right and left-handed users will have the same comfort while holding it. The grip of it is also impressive. Some people sweat a lot and for them holding the gun gets tough. But that won’t be a matter with it as the grip is excellent and it will enhance your aim and accuracy. The stock of the rifle also has rubber recoil pad. Already you would feel little knock while shooting thanks to its nitro piston system. And the addition of the pad almost absorbs the rest of the kickbacks too. So, users won’t feel any fatigue in spite of long hours of shooting.

The rifle offers good quality ammos. Normally, the Crossman Nitro Venom uses the .22 caliber which is great for hunting. It is stable through the air and doesn’t get very much affected by the wind. With it you can knockdown your target without any problem at all as the pellets are heavy. Also users can use the .177 caliber pellets if they wish to. The .177 caliber pellets will offer more velocity than the .22 caliber. It might not be an efficient choice for hunting but for shooting practice they are indispensable.

Like every other gun, the Nitro Venom also comes with a scope. The scope for Crosman Nitro Venom Break Barrel air rifle used is a Center Point 3-9x32mm. The scope got mix reviews from the users. But most of them were pleased with it. No doubt, the scope could have been better but for that price you can’t expect anything more than that. Anyone can easily set up the scope by themselves. Now coming to the more technical parts. As you can see that it is a center point 3-9x32mm precision scope. This means that the lens appearing in the front of the scope is 32 mm in diameter. And the 3-9 means that this scope offers different ranges of zoom which is between 3x to 9x. With proper windage and elevation adjustments, the scope works quite fine.  It is a good enough scope for long range shooting but if you demand more than that then you could easily get a better scope.

Most of air rifles create a loud crack that is enough to make sure that your neighbors will call the authorities complaining about it. In that respect, the Nitro Venom is a dream come true. All thanks to its gas-piston system, the rifle doesn’t make any noise at all if you compare it with other guns. Even the pellets hitting the target would create more noise than that. So, you can use it in residential areas without worrying about complaints.

If you assess everything about the Crosman Nitro Venom Break Barrel Air rifle then there are more positive points than the negative ones. There are some concerns about the rifle which don’t come as a big surprise at all. But those are minor flaws. In total, this air rifle is outstanding.
It got enough power; accuracy to please anyone. Also, the design of the gun make it what it is. And on top of all that is the price which is a big win for the buyers. For that value, you won’t find that many weapons which can really satisfy the customers. And the Nitro Venom assures to please everyone. So, you don’t need to worry to break your piggy bank for a high-tech gun, rather I would suggest you go for it. Still if you are looking for something else in the nitro piston category then you can take a look at our Review of Benjamin Titan GP Nitro Piston and compare between them.

For such a top notch weapon like the Nitro Venom, you only have to pay $137.10 from Amazon. In this deal, you could save up to 43% which means the original price $239.99 and the will get free shipping.