If you are here at Air Rifle village, which means either you are fooling around or really interested in rifles. If you are here for the later case then you’re at the right place. Go for Benjamin Titan GP Nitro Piston Air Rifle. Are you seeking for a gun that is cheap but good enough to use as a practice gun?  If that’s your case then you should know that there are a lot of options in the market. But the real task is picking the perfect weapon as it can be little hard without knowing anything about it.  And that is where we come to your rescue to give you proper guidance to help you buy the best air rifle for your money.

As I mentioned before that there are so many options to choose from and picking the right one is a tough job. But I’ve done the hard work and picked one for you. It’s Benjamin Titan GP Nitro Piston.  A fine looking, powerful pellet air rifle for practice shooting for amateurs. Also, the rifle is good enough for seasonal campaigners. And the best thing about it is that it is not that expensive. 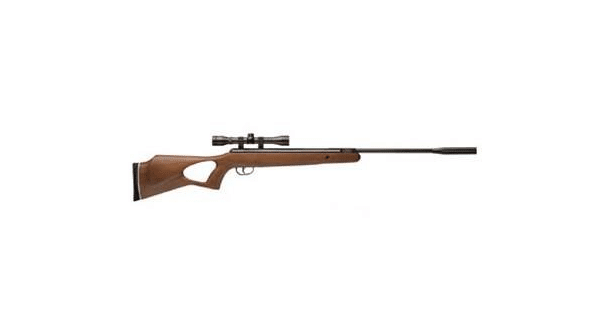 Before buying a rifle, the first thing anyone should do is to research about the merchandise. Like comparing it with other products in its price range and get to know its strengths and flaws. So here we have done that research for you guys. Benjamin Titan GP Nitro Piston Air Rifle Review is here for you and you will find everything you need to know about the. Read all the information about it and see whether this pellet rifle has enough to meet your needs to lure you to buy one.

From the name of Benjamin Titan GP Nitro, you will get the idea that this gun uses the nitro piston technology. If you don’t know what that is then you should know that it is like any ordinary spring gun but instead of the spring the gun uses a gas-filled cylinder to shoot the pellets. This is a single shot rifle with break barrel system to reload the ammos. The rifle uses .177 and .22 caliber of pellets for the ammos.

So before we go into the best and worst qualities of Benjamin Titan GP Nitro Piston here take a look a the full specification of the air rifle. Using this spec you can compare this with the other air rifle and choose the best one.

Perfection is nothing but a delusion. Manufacturers could try to achieve as close of as getting their products perfect, but there will always be some kind of flaws. And the Benjamin Titan GP Nitro isn’t any exception. Like every other rifle, it has some problems too. Let’s take a close peek at them.

People who have used the Benjamin Titan GP Nitro Piston has highly rated this rifle. It has got 4.6 out of the possible 5 stars from the Amazon which shows that users of this gun were quite satisfied with it.

Customers those have used it were happy with its accuracy, extreme force and not making too much noise. And the cherry on the top is the price which is reasonable for most.

Yes, it has some issues but there are more positives than flaws. I’ve taken everything on account and came to the conclusion that the Benjamin Titan Nitro is a perfect buy for anyone. Because, it is a perfect learning rifle to start with. It can also be your hunting weapon. Or you can use it to eliminate pests from your home without getting complaints from your neighbors. Even it can make into your collection of rifles too. In simple words it is hard to find another rifle like this that will provide such power, accuracy or finesse in such a low price range.

The best thing about this rifle is surely its low price. The actual price for the .177 cal was $174, but now you can get it for only $119.99 which saves you $55. On the other hand, the current price for the .22 model is $134.68 which will save you more than 50% from the listing price of it. No doubt it is a great offer. Also if you are looking for something better with better price and power than you can always check the other air rifle of Benjamin brand. But i will recommend Benjamin Marauder PCP air rifle. Cause it’s the best available out there in that price range of under $500. We did a review of it as well you can check that for getting detailed info .