Here we have showed you some awesome air rifles and without any doubt they are quite unique from one another. But one thing that you would find common among all those is the style. There aren’t many rifles in the market that can fulfill this requirement except the Benjamin 392 Bolt Action Variable Pump Air Rifle . Not saying that they all look the same, but want to focus on the part that the style of those air rifles are quite modern. Which is obvious and so it doesn’t come to me as a big surprise at all. But the fact is many buyers love the classic look with great technological advancements of today.

This air rifle will certainly bring some memories of the past as it is an American classic in many ways. The Benjamin 392 Bolt Action air rifle is undoubtedly one of the best pump action air rifle right now available in the market. The model that we are talking about today is an updated version of the same air rifle. The looks of both guns are very similar, but this model has more to offer. So today we will give the detailed review of Benjamin 392 Bolt Pump air rifle .

Benjamin 392 Bolt Action Variable Pump Air rifle is a timeless air rifle made in America. As the name suggests the gun uses a variable pump which is actually a multi pump pneumatic system. Maybe some of you are familiar with these terms but some of you have no idea at all. This rifle uses a piston and a cylinder in its chamber. And the term pneumatic system refers the particular way to use the pressurized air in the cylinder. So when we cock the rifle, we apply more pressure to it.
The Benjamin 392 Bolt has .22 caliber pellets. The air rifle is a single shot, so a single shot is what you would get to make your chance count while hunting. This gun will make the shooter more efficient as they would know that they have one shot to get the target.

Best Air Rifle According To US:

Here is the detailed spec of Benjamin 392 Bot & another interesting thing about the rifle is that it has rifled barrel. In this way the inside of the rifle barrel is cut inside. So when the pellet is shot, it moves inside the barrel which helps it to stabilize through the air which massively improves the accuracy. Other noticeable thing about the barrel is that it is made of brass. Brass barrel is way better than steel as they don’t rust easily.

I have done my share of research about the Benjamin 392 Bolt Action variable air rifle. And one of the important things in the research was taking notes from different online markets. Customers review can help you to find the strengths and flaws of any product. And I am highly impressed with this air rifle as it has more positives than negatives from customers too.  The biggest strength of this rifle is its affordable price and great looks that attracts everyone. And some of the flaws can be overlooked. As anyone considers buying this gun knows what to expect. If they are getting this gun then they are ready to pump the gun for every shot. Only thing that doesn’t favor it is the power. If you’re considering it to hunt all kind of animals then this isn’t the weapon. As I have said couple of times, this rifle is perfect for hunting animals that aren’t that big in size. Keeping that aside I will say this is an outstanding rifle. Nothing can go wrong with this. For a reasonable priced weapon you are getting durable, reliable weapon that would last for years. Still if you are not sure and want to check some other ones than i insist you take a look at our Review of Benjamin Marauder PCP Air Rifle and compare between them then decide yourself.

The Crossman Benjamin 392 bolt action variable pump air rifle would cost a little more than $140 from amazon. This is a great investment because this air rifle would be with you for the rest of your life and still be working the same way as it did when you first got it. 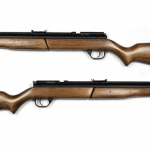